It's not that I don't have any subject matter. I've got plenty. For example...

Our Disney Vacation. It was fun but very crowded. And hot. Very hot. Did I mention hot? Also expensive. The Disney people must own and control the entire middle of Florida.

McDonalds? Wendy's Olive Garden? Chili's? Forgettaboutit. The closest one was probably in Miami somewhere. Why am I a little bent out of shape about this?

Mainly because these are cheaper places to eat, which is nice if you're already spending so much for tickets that the total for the week would reduce the national debt by about 50%. Okay, I'm exaggerating. A little. Still, it was lots of fun, especially for the grandkids. And the hotel we stayed in was conveniently located in the park. A place called the Swan. It was the grandest place this old redneck has ever spent the night in. Here's a couple of pics of the place.

This first one is a picture of the front of the hotel. Note the giant concrete swans on top. 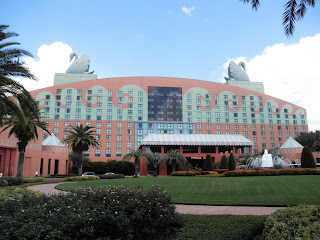 This pic is inside the Swan at a fountain in the lobby; note the big white swans in the fountain. I'm beginning to detect a theme here. Those two cool dudes in the shades sitting on the marble bench are Brent and Daniel. They are in the top 5 of all grandkids in the entire history of the world. Their brothers Jason, Jonathan, and Erich round out that top five, all five being tied for the top, number one ranking. 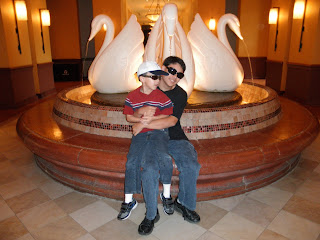 Well, we did have fun, lots of it. Especially after the first day or two because by then we learned to kick back during the day and go to the park during the late afternoon and evening hours when the temperature dropped down a bit and the humidity dropped as well (from about 223% to 98%). Joyce got a lot of needed rest during the day and joined us every evening for dinner and a ramble through the park.

Thinking about our vacation pushed the old retro button and I was reminded of the "Mickey Mouse Club." I'm not sure of the make of the old TV set in this youtube video; the title on the video says RCA, but I'm not sure because the title also says the show's from 1958 but confusingly the info note below says 1955. Anyway, the TV set we had in our living room in 1958 was a seven year old 17" Motorola Console. And, yes, it had been tuned to the Mickey Mouse Club at least a FEW times over the years. But the "Club" was an afternoon show and if we (my brother and me) watched anything at that time of day it would most likely have been an old western on a local show hosted by Ruff 'N Ready. But I digress, here's the "Club" intro song.

I'll Be Seeing You