This is a revised version of an earlier Memorial day post.

Many people today, especially the elite, think overt patriotism of any kind is out of fashion and only for the uneducated. They think displays of patriotism and support for the military are mawkish and inappropriate because America in their view is not really a special country.

This is America, so they have a right to think that and to say that. I just hope they don't totally forget that those who serve guarantee them that right. On this Veterans Day I’d like to remember and honor one of our greatest military heroes, Audie Murphy. 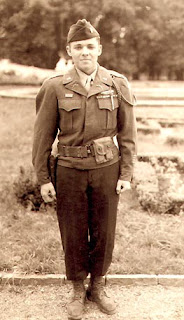 What do you do if you're a poor farm boy in North Texas in the late 30's and your dad deserts the family? If you're an honorable and responsible young man with a sense of duty like Audie Murphy, you quit school and go to work, plowing and picking cotton for a dollar a day. To help put food on the table, he became very accurate with a hunting rifle (he killed squirrels and rabbits and other small game).

When the Japanese attacked Pearl Harbor, Murphy, then 16, tried to enlist in the military but was rejected for being under the age of 18. A year later, when he was 17, his sister adjusted his birth date so he appeared to be 18. When he entered the Army, he was 5 foot 5 inches tall and weighed 110 pounds. Because of his size he was turned down by the Marines, the paratroopers, and the Navy. The Army accepted him.

Not only did he have a slight build and a baby face, he seemed to be weak physically. He passed out during a closer order drill and generally gave the impression that he might not be able to deal with the rigors of combat. His company commander tried  to get him transferred into cook and baker school. But he insisted on a combat assignment. Finally his superiors relented and he was sent to North Africa to receive training with the 3rd Army for the invasion of Italy. As the invasion progressed and Allied Forces moved into France, Murphy proved that he was right and they were wrong. He became America's most decorated soldier in WWII.

Wikipedia reports that in August of 1944 in France
Murphy's best friend, Lattie Tipton (referred to as "Brandon" in Murphy's book To Hell and Back), was killed by a German soldier in a machine gun nest who was feigning surrender. Murphy went into a rage, and single-handedly wiped out the German machine gun crew which had just killed his friend. He then used the German machine gun and grenades to destroy several other nearby enemy positions. For this act, Murphy received the Distinguished Service Cross (second only to the Medal of Honor).
Over the last few months of 1944, he received two Silver Stars for his bravery in action and a promotion to Second Lieutenant and Company Commander. In January of 1945, in two feet of snow and 14 degree temperature he took his unit (at an effective strength of 19 out of 128) into battle at Holtzwhir France.  Realizing they were hopeless outmanned by the advancing German tanks and infantry, Murphy sent his men to the rear and proceeded to use the phone to direct artillery fire. 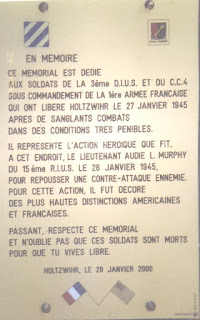 But that was just the beginning.  What he did in the battle of Holtzwhir was the kind of deed that legends spring from. For his brave and heroic actions that day, he received the nation's highest military honor: The Medal of Honor. To read a very detailed account of Murphy's determined stand that day, read this article:
Fort Hood Sentinel.

Mr. Phillip Washburn, author of the article, says,
"Using his map and phone, Murphy directed and corrected the barrage as he emptied his carbine at the ever-closing infantry. As the tanks and riflemen closed in, along with the artillery Murphy himself self directed, he refused to budge. Then he made the decision that forever changed his life. He climbed onto the 31-tons of burning tank destroyer and employed its 50-cal. machine gun on the infantry, all the while continuing to direct artillery almost on top of his own position. At one point, when the officer on the other end of the phone asked how close was the enemy, Murphy replied, "Hold the phone and I'll let you talk to one of the bastards."

After the war Murphy became a Hollywood star and appeared in over 40 movies. The 1955 movie based on his autobiography and starring a reluctant Murphy himself, To Hell and Back, was the top grossing picture for MGM until "Jaws" came along. He also starred in "The Red Badge of Courage," "No Name on the Bullet," "Destry," "Drums Across the River," "The Cimmaron Kid," "The Duel at Silver Creek," "The Quiet American," etc. He wrote more than 17 country and western songs and was inducted into the Country Music Association of Texas Hall of Fame. His songs were recorded by artists such as Eddy Arnold,  Dean Martin, Teresa Brewer, Roy Clark, Charlie Pride, and Jerry Wallace.

Though all of his honors, commendations, and his successful career in the movies were enough to make most men vain, Audie Murphy retained his humility. 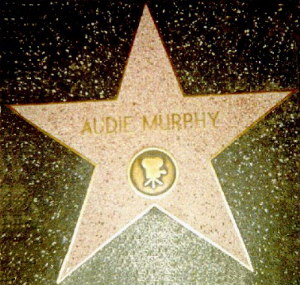 The following is a picture of the Audie Murphy and Hunt County Veteran's Memorial in Greeneville, Texas. 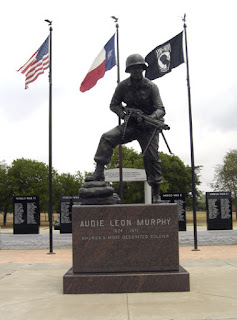 On one of our frequent trips to North Texas to visit our son and his family, we stopped off at the Memorial to pay our respects to one of America's greatest military heroes and to the other fallen soldiers named there.

He was buried in Arlington National Cemetery and his gravesite is the second most visited site in the cemetery (JFK's is first). 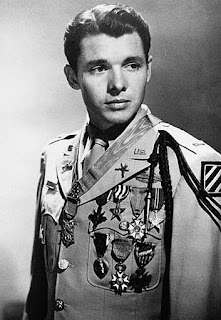 Following is a list of Audie Murphy's Military Medals: