Over the last few decades, many country singers have been classified as "outlaws." Some say that this "outlaw country" music developed from an opposition to the "Nashville Sound" of the late '50s, '60s, and early '70s which had been shaped by producers like Chet Atkins. Atkins and his contemporaries favored "'smooth strings and choruses,' 'sophisticated background vocals,' and 'smooth tempos.'"

Some writers believe Waylon Jennings started the revolt while others argue that it was wild man David Alan Coe whose singing and behavior led to the now coveted outlaw label. Certainly Willie Nelson, Kris Kristofferson, Johnny Cash, Merle Haggard, and Hank Williams, Jr. were part of the "revolution" as well. 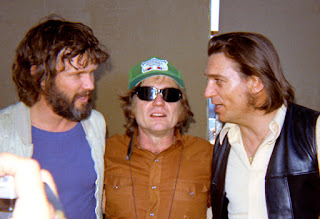 The photo to the right ("Kris Willie Waylon" by Bozotexino, Licensed under Public Domain via Commons) shows young Kristofferson, Nelson in shades, and clean shaven Jennings at Willie's 1972 4th of July picnic.

But there's an earlier use of the term "outlaw" in music. Historically, many ballads have been written about outlaws, enough to call the outlaw ballad a sub genre. The Cambridge History of English and American Literature mentions outlaw ballads written and sung at the end of the Middle Ages (the 14th and 15th centuries) about Robin Hood and suggests that the outlaw tradition is even older.

Country music writers and performers have kept that tradition alive in modern times. There are many examples of outlaw ballads in country music. This link leads to two John Dillinger ballads, the first sung by Joe Smith (the Colorado Cowboy), the second written by Tom T. Hall and performed by Billy Grammer.

There were songs written about other outlaws too, famous in their own time, but not as well known now. Back in the Bronze Age, when I taught a second year college Intro to Poetry Survey, I used the outlaw Otto Wood as an example.


born in Wilkes County, N.C. in 1894. He began his life of crime at an early age, stealing a bicycle from a boy in North Wilkesboro, N.C. He was quickly caught and spent time in the Wilkes County Jail. He was subsequently sentenced to serve on a chain gang, but the foreman sent him home to his mother due to his age...He suffered from a foot ailment (a birth defect) and lost his left hand when he was a teenager...Repeated scrapes with the law, mostly involving thefts and bootlegging, led to numerous incarcerations in jails in North Carolina, Tennessee, Virginia and West Virginia. He is credited with a total of 10 jail breaks throughout his criminal career. In 1923, Wood was charged with the murder of A.W. Kaplan, a Greensboro, N.C. pawnbroker. He was convicted of second-degree murder and sentenced to serve 30 years in N.C. Central Prison in Raleigh. After that conviction, Wood made four escapes from the state prison. During his time in that prison, Wood wrote an autobiography.

A year after his death, the Carolina Buddies recorded the song Otto Wood on Columbia Records. Following his last escape, Wood was spotted by police officers in Salisbury, N.C., on Dec. 31, 1930. They approached Wood, killing him in the ensuing shootout.
Walter "Kid" Smith of the Carolina Buddies wrote they lyric.

They put him in the pen, but it done no good
'Cause it wouldn't hold a man they call Otto Wood
It wasn't very long till he slipped outside
Drawed a gun on the guard, said, "Take me for a ride"
Otto, why didn't you run?
Otto's done dead and gone
Otto Wood, why didn't you run
When the sheriff pulled out that 44 gun?

The version of the old outlaw ballad I used in class was from Doc Watson's album, "The Best of Doc Watson, 1964-1968." But the following is the original recording of the song by the Carolina Buddies.