Oh, a storm is threat'ning


My very life today
If I don't get some shelter
Oh yeah, I'm gonna fade away


A storm is threatening. Most probably a s--t storm. Gimme some shelter.

Rolling stones gather no moss. That's what uncle Adam and Uncle Jamie say. They proved it.

And I'm a stone. A Stones fan anyway. I guess I ain't been rollin' enough lately.

What I read in the news these days is making me sick, physically and existentially. I know I'm on about the Stones here but I'm sorta like the guy in the Beatles' song too, you know? The one who blew his mind out in a car.

Jumping from one allusion to another like this is probably a symptom of what that guy had.

Like I said, there's this stuff on my shoes. And it stinks.

The failure of the President to protect our diplomats in Benghazi (I know, I know, what difference does it make now), the President's corruption of the IRS (I can't believe the audacity of these people expecting any rational person to believe their lies and distortions), the President's complete (and insane) withdrawal of our troops from Iraq, the resulting emergence of the latest crop of Muslim terrorists, the more recent failure of the President to deal with the border crisis of his own making...and above it all, over it all, under it all, Main Stream media's total abandonment of its responsibility.


I think I need to scrape that shit right off my shoes.

Wading through the waste stormy winter


Come on come on down you got it in you
Got to scrape that shit right off your shoes.

Going West for awhile. See you guys next week..

A Bluegrass Post With a Little Side of EP

I've enjoyed bluegrass music for most of my life. I can remember sitting on the floor in our living room listening to the Grand Ole Opry on the radio in the late '40s before Dad bought a TV. Even then I liked the bright tinkling banjo, the dobro, the fiddle, and the guitar flat picking. 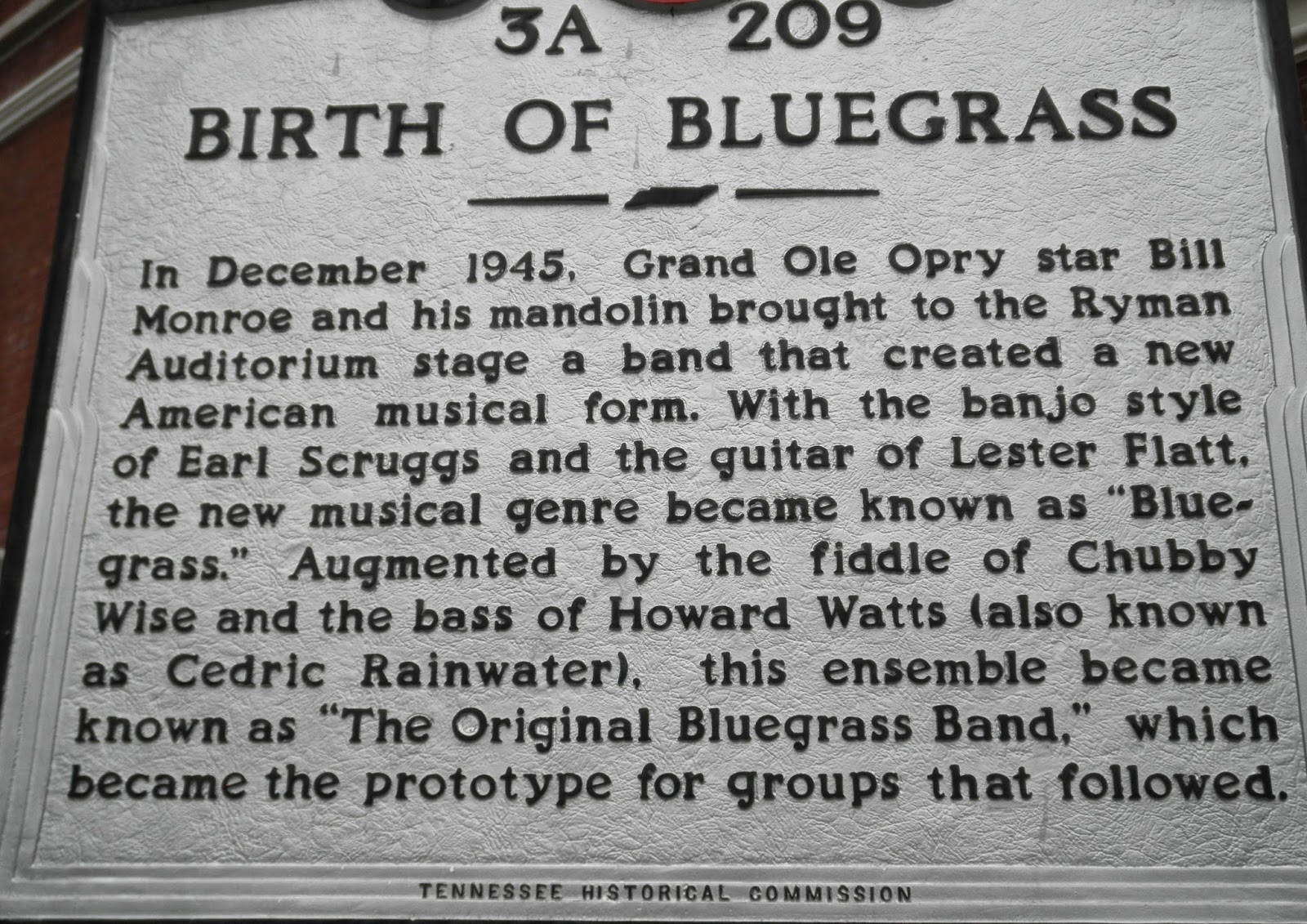 Commemorative Plaque Outside the Ryman Auditorium in Nashville, TN

My interest in this music increased when Joyce bought me a Silvertone in the '60s. On the surface, it appears simple, easy to play. But it's not. I've never gone beyond the three basic chords, but I still love bluegrass to this day. And that means that I enjoy the music of Bill Monroe, sometimes referred to as the "Father of Bluegrass." I'm never quite sure what to make of all those "Father of This" and "Father of That" claims, but the genre did acquire its name from his group, the Bluegrass Boys.

I think I've mentioned before on this blog, that I've lived on a dead end road in southern Sumner County since 1973 and that Monroe had a farm at the end of our road until his death in 1996. He was a good neighbor, always waved when we passed him on the road, and once when we had a deep snow, he came along on his tractor and offered to plow off our driveway and several others who live along our stretch. On our trip to England in '87, we were eating lunch in a Pub and struck up a conversation with our waiter who was a Bluegrass Bill Monroe fanatic. When we told him Monroe was our neighbor, I don't think he believed us.

As the plaque above indicates, besides Monroe with his mandolin and vocals, the members of the original group included Chubby Wise on fiddle, Howard Watts on bass, Lester Flatt, vocals and guitar, and Earl Scruggs on the five string banjo. This is the original group with Monroe's famous waltz "Blue Moon of Kentucky."
The story of how a Rock and Roll version of the song in 4/4 time became the "B" side of Elvis' first Sun Records single is on Wiki. Wiki says Monroe liked Presley's version and gave it his blessing.

Lester and Earl left Monroe's Bluegrass Boys in 1948 to form their own bluegrass group. One important, make that very important, thing they did was to add Uncle Josh and his dobro. Here's that old raunchy classic "Salty Dog." Look for Josh's fantastic break.
Sometimes you just feel like an old "Salty Dog." Ain't that the ever lovin' Bluegrass truth?

Sometime in 1954, my friend Doug and his father invited me to go with them to the GM Motorama show which was making a stop in Nashville. It was a memorable and important experience. The show itself was spectacular with its focus on new GM models and concept cars like the new Corvette. 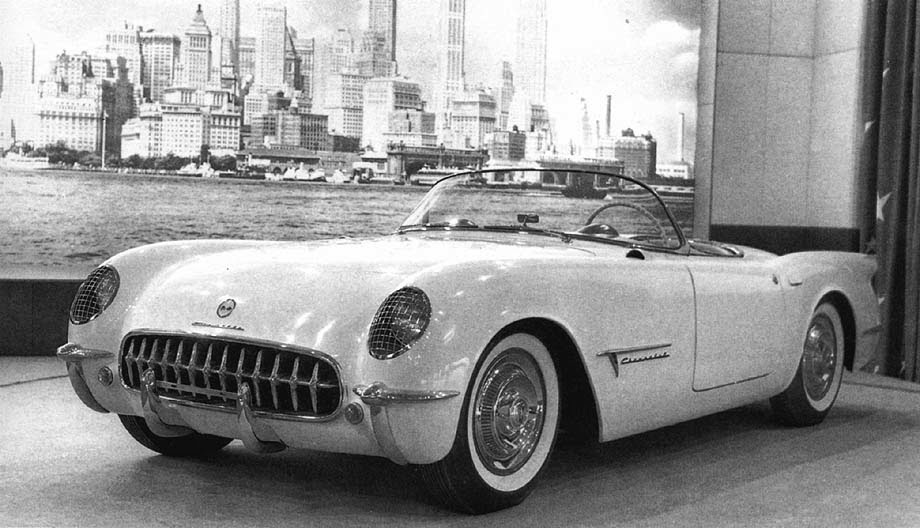 One of the things we did at the show was join the Fisher Body Craftsman's Guild, which sponsored a nationwide auto design contest for teenagers. We received a packet of literature with information on the contest's junior and senior divisions and specs for models that could be entered (types of cars that could be entered, suggested construction materials, scale 1 inch equals 1 foot, etc.).

Doug and I both began designing and building models to enter in the contest and we both won several state awards over the next few years. My first junior entry was a carved wooden model of a convertible sports car based on my own design. I won an honorable mention and $25. My last year in the junior division ('55-'56) I built a big Buick looking sedan that was lucky enough to win the First State Tennessee and Regional award. The prize was $150 and a trip by train to Detroit that summer. 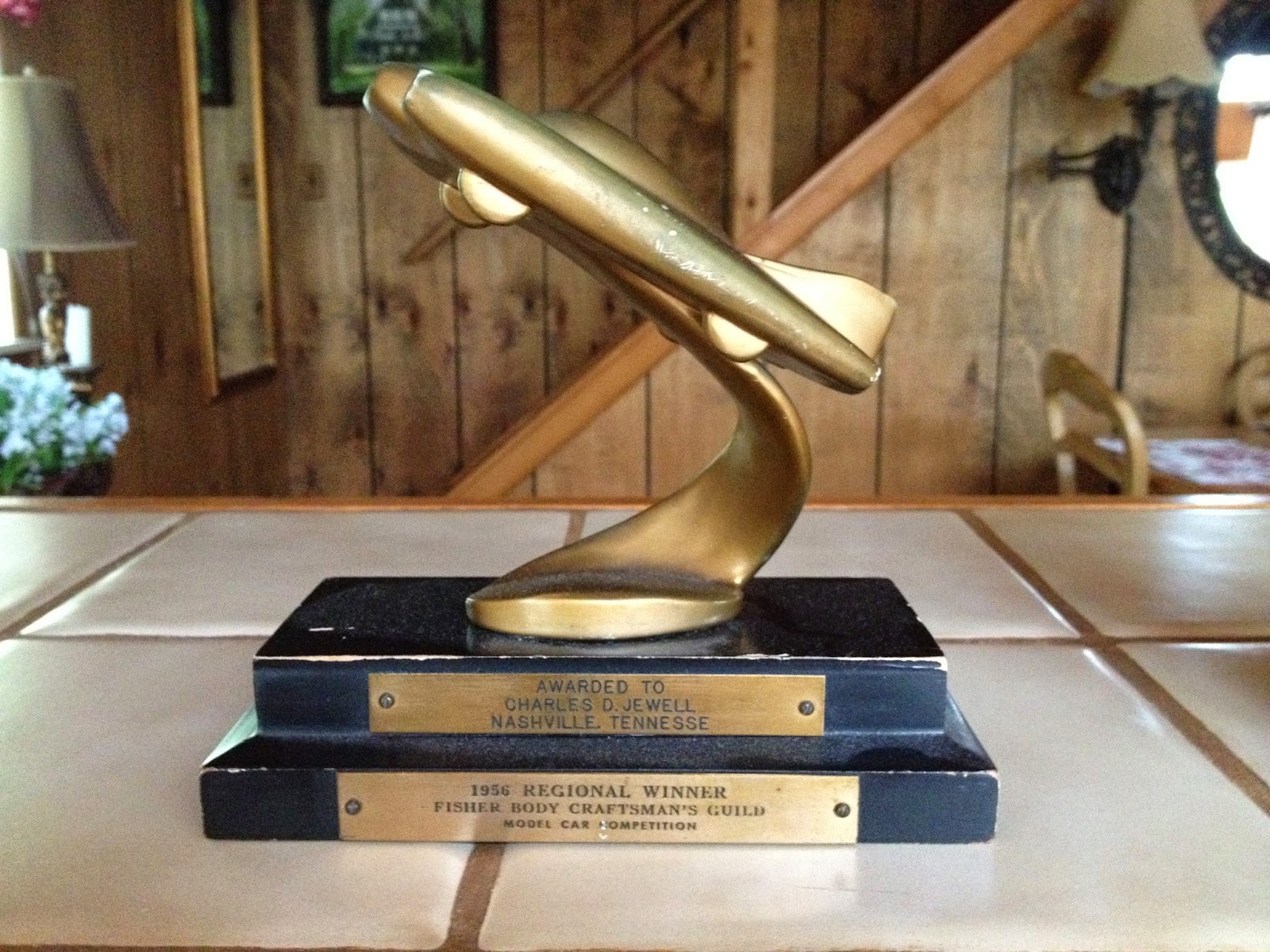 Besides the cash prizes, I received a small personal trophy and my high school (Isaac Litton) was given a trophy as well. The principal presented the school trophy during an assembly that fall. The trip was fantastic for a 16 year old.

All the winners stayed in the Sheraton Cadillac Hotel and we visited the new GM Tech Center, talked to real stylists, and saw the futuristic GM concept cars up close. 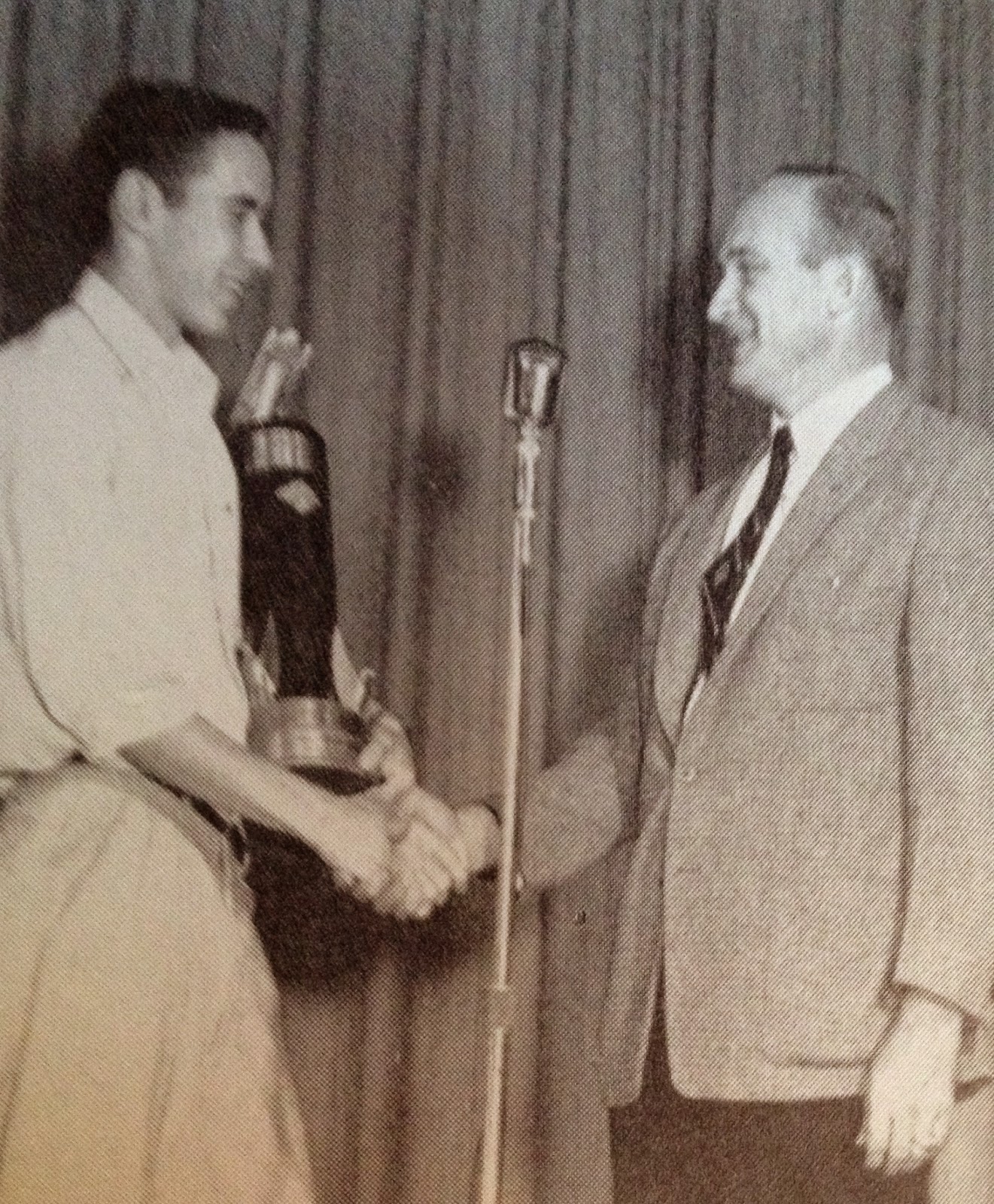 I was so inspired I came home in the fall of 1956 and began work on two models to enter in my first year in the senior division (the rules allowed more than one entry per person).

One of these designs was a radical front entry car carved out of a big block of balsa. I only have one pic of it from those days and it's unfortunately a double exposure. I'm posting it anyway so you can get an idea of what it looked like.

This car is in bad shape today so I can't at this point take a newer picture of it. (As an over indulgent grandfather, I had unfortunately let my grandsons play with the big models during the 80s. None of the models held up to well in that kind of play but the fragile balsa is in especially bad shape. I'm slowly restoring the models today and when they're ready I'll take some new pics and post them here on the Cumberland Post.)

The other car I built that year was carved out of a solid block of poplar wood my grandfather (a master carpenter) had found for me. This model, about 18 inches long, was also pretty radical looking and had super high fins. 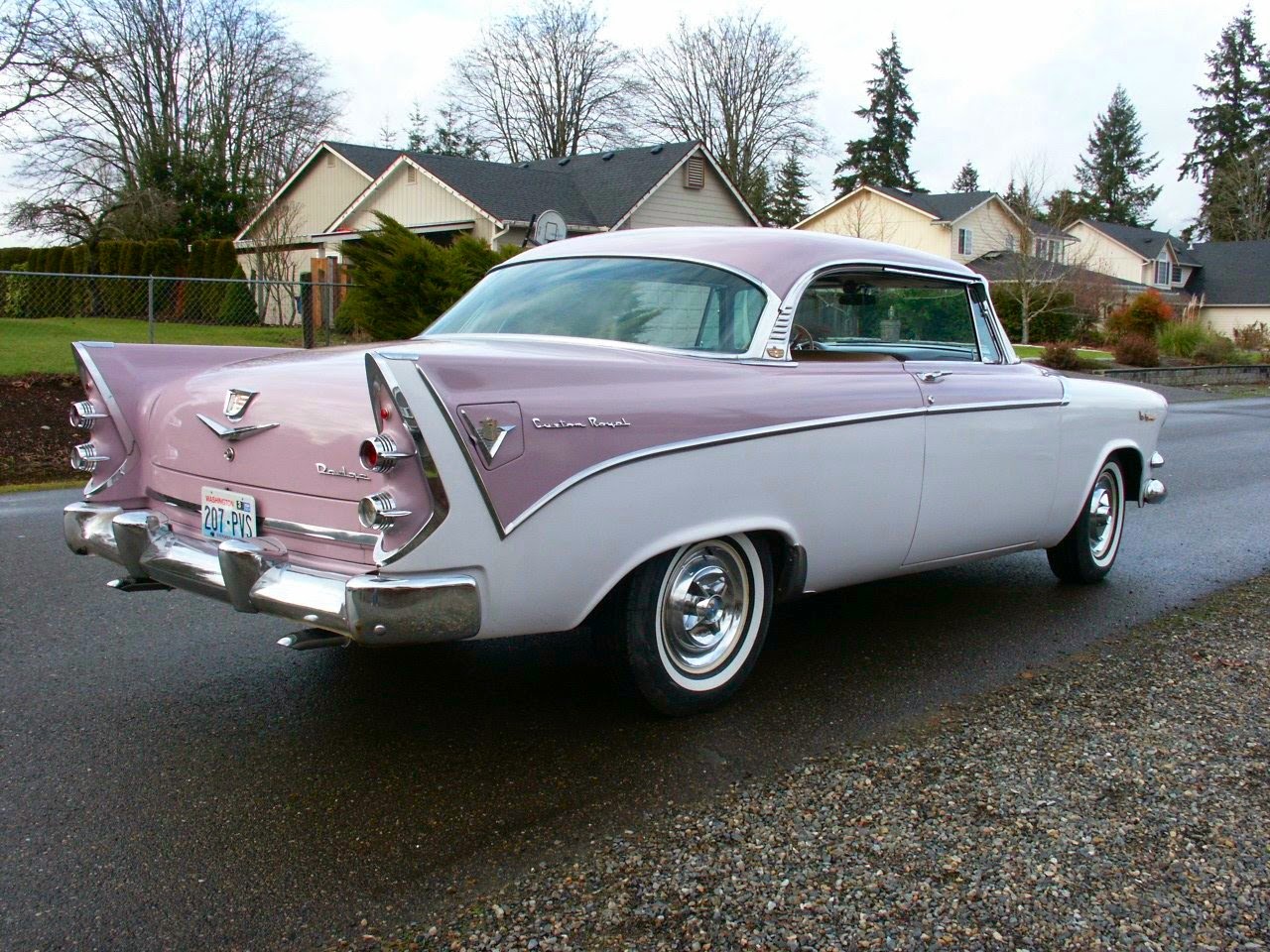 If you remember, the fall of '56, all of the Exner inspired Chrysler Corp's cars were beginning to have sexy looking fins. They went all out for fins in '57 - '59 but the fins on their '56 models were still relatively restrained, as you can see from this pic of a '56 Dodge (the La Femme model).
I was slightly ahead of the fin curve with my design as you can see in this current pic of the model being restored. 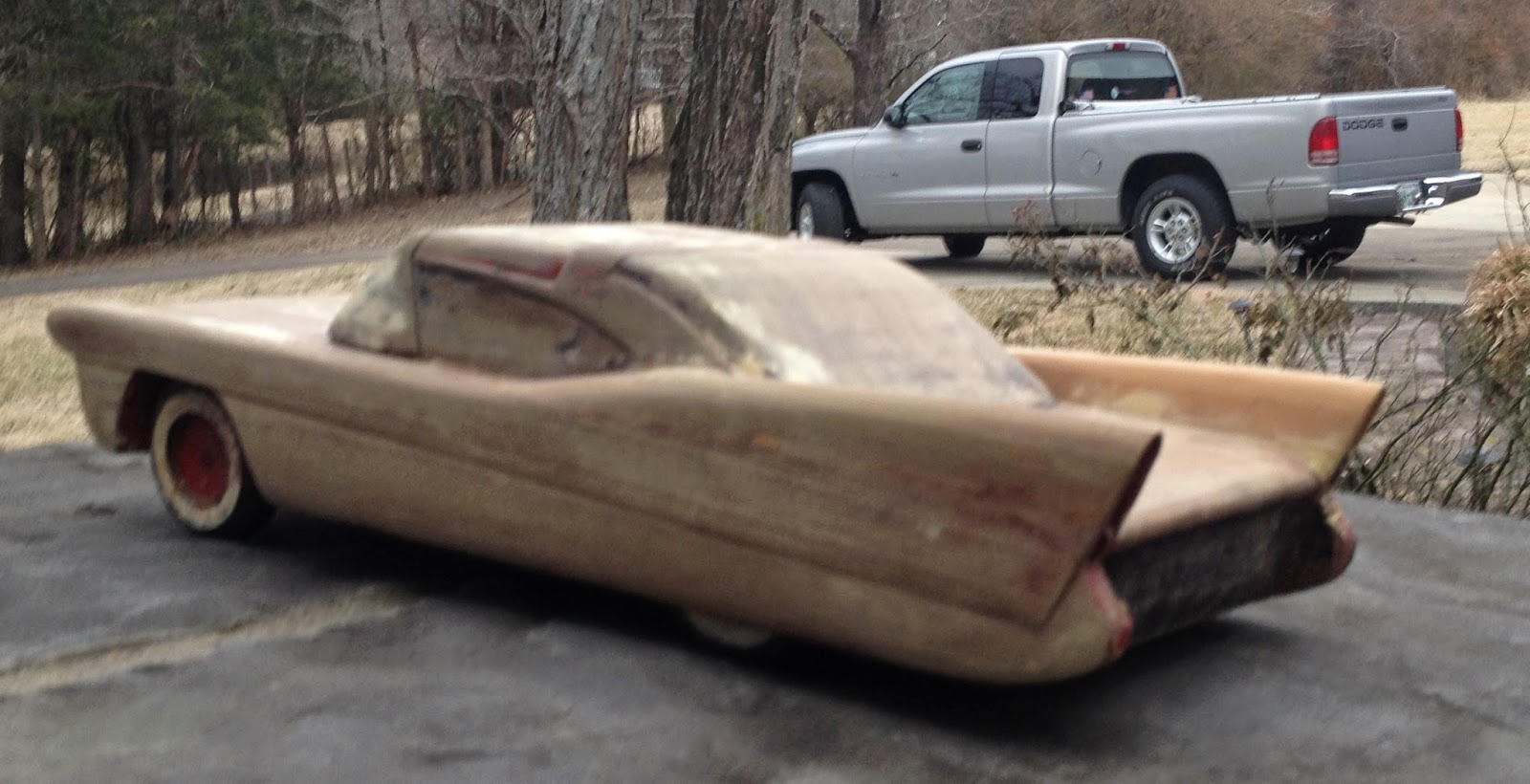 I selected this model to restore first because it's in the best shape. I plan to get around to the others in time. Actually, this high finned design is a bit radical too in the sense of its impracticality. I think the fins looked pretty cool and sexy, but rear vision would have been considerably reduced. Looking at the car now, I see several other design features that were just beginning to show up: stacked quad headlights, a wrap over and wrap around windshield, a huge amount of glass in the rear window, and painted and integrated bumpers (those parts haven't been reattached to the model yet).

If I remember right, I received a $50 3rd state award for this model, but it and the other front entry one were both scored extremely low on practicality.

My work on these models and my limited success in the Fisher Body Craftsman's Guild gave me more self confidence, something I sorely needed. And I learned other things as well. I learned a bit about organizing large, long term projects and how such projects can be accomplished ahead of deadlines with steady and routine work on a daily basis. I did not pursue my high school dream of becoming an auto stylist, but what I learned from the Guild has stood me in good stead in my education career and my life over the years.

It's too bad that GM discontinued this program in the late '60s. It's also too bad that education which synthesizes work on "fun" projects with valuable concepts is not a part of our educational system today.