Mr. Eastwood and the Empty Chair 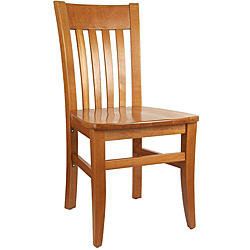 I agree with Mark Steyn. Clint Eastwood knew exactly what he was doing at the RNC on Thursday night. As Steyn says, "the hair was a clue. No Hollywood icon goes out on stage like that unless he means to." The whole thing was a schtick, and a very well played one at that.

And the lines about the country belonging to all of us, absolutely brilliant. Like Clint said, "when somebody does not do the job, we'v got to let them go."

Mr. Obama, come into the office. I've been trying to meet with you for some time now, but I hear you''ve been travelling quite a bit lately.

Grab a chair there. Please sit down.

First, I want to thank you for your efforts, albeit however slim and ineffective they were, over the past three and a half years.

But, you and I both know, you're just not getting the job done. A lot of people had a lot of hope and you let them down. They depended on you, and the stuff you tried worsened their plight instead of making it better.

No, you can't blame the guy before you. He messed up some things at the end, but he had a lot on his plate after that attack. That argument was probably good for six months to a year at most, but now the record is yours, and it's not good. Not good at all.

Looking back now, I think we made a mistake in hiring you in the first place because of your abysmal lack of experience. Also, there's that redistributionist policy you advocated and the harebrained notion  that government is more important and productive than people. Plus, there was year after year of rampant over spending. And how in hell can you operate a huge enterprise like this without a budget? Don't get me started on that.

I could go on, and you know it. But all that's water under the bridge.

Yes, I know it's pretty abrupt, but the job you had was not tenured, and this is the real world. Not academia.

No. This is not about racism. It has nothing to do with color and it's time you and your friends stop playing that card all the time. It's become very tiresome and your overuse of the term has diluted the meaning of it in real situations. Listen, you're a smart enough guy and you make a pretty good speech from time to time, but overall, we're not satisfied with your performance, not satisfied at all.

You can keep drawing your salary till January 20th of next year and, like other past employees in your job, you'll still get protection and a generous pension. But that's it. On that date I expect you to clean out your office and vacate the premises. I wish you well after you leave.

Mr. Obama. One more thing. It wouldn't be a good idea to put us down as a reference, if you know what I mean.