My Isaac Litton HS pal Bob Bell sent me this; it's a great example of Reagan's ability to communicate, and, in this instance, tell a fantastic joke. I think you'll agree that the punchline is a political smackdown with much contemporary relevance.

Home Sweet Home and You Are My Sunshine

Scooney and I were picking a little the other day and he came out with an old one that I really liked. You've heard it too, I'm sure. It's called "Home Sweet Home."

I searched around on You Tube and found a great little family band that does a real nice job with old this tune. They're called The Laon Family Band and that's Daddy on Bass, Momma on banjo and mandolin, and son on guitar. Their name, according to the channel notes, means "very joyful" in Korean.


The Laon family also do a great job on "You Are My Sunshine."

Well now, I'm not quite sure what to make of this. But I like it. A lot.

If it try to say anything else, it'll probably come out as a cliche. Good thing I once was an English Prof and I'm fully licensed to use cliches. So, stand back behind the police marker and I'll let 'er rip...

(Bluegrass) music is fun and it's universal.

I warned you that it would be, well, a cliche, didn't I? But I think there's always a little truth lurking inside all that apparent cliche vapidity. A cliche had to start out at least with some connection to observable reality, right?

In the video, the Jaybirds (the bluegrass guys) are properly stoic (except for a smile or two) in their playing and demeanor as are the amazing Asian ladies. Man, those fingers are flying. By the way, I think the song is called "Katy Hill" and you can purchase it on iTunes now.

There's a whole bunch of people down I24 at the Bonnaroo festival sweating in the hot sun and listening to some great music. Here in Nashful we're in the middle of the big CMA Festival. The Tennessean said earlier that 65,000 fans were expected and now some observers are saying that the number could be bigger than that.

It's hot as hell here too and the streets are blocked off and traffic is backed up all over the place. But people are having a big old time eating and drinking and listening to country music. People have come to Nashful for this event from all over the world, but most are from the States and Canada. There's no question that the CMA Fest is a good thing for the city and for country music.

But in the midst of all this hype and the coiffed and homogenized stars and the electrified and synthesized instruments and the wired and facebooked crowd it's a good time to remember how this kind of music got started. The staring point would be this guy.


Most of the greats in country music have eventually covered Jimmy Rodgers songs or done tribute albums. Here's Merle Haggard's version of one of Jimmy's best known songs, "Waiting for a Train."

And finally here's the Killer doing another old Rodgers tune, "The One Rose That's Left in My Heart."


That last song is dedicated to all the old codgers who still have that "one rose" left in their hearts. I'm one of 'em. Are you?
Posted by Dapper Dan at Saturday, June 11, 2011 7 comments:

Sorry about that long hiatus, Cletus.

Way back in the day when I taught college classes, I would sometimes give "pop" quizzes, pop in the sense of unannounced. Students would moan and groan a little, but since the quizzes didn't count that much overall, they dealt with them. As a matter of fact, I sometimes used these quizzes to give myself a little time to get my act together after a long night of "academic preparation." Heh.

The word "pop" can of course also mean popular, as in pop culture. The pop quiz today has that meaning too. For today's quiz post, let me first deal with the hat tip question. Super blogger Andy sometimes does these "guess the movie" posts. Some of you have probably seen them. He usually has an obscure movie with some lame actor in it from the '80s and he gives you a whole bunch of clues designed to lead you on a wild snipe chase. I've been on some of those chases, so I know what I'm talking about.

What I'm saying is, I don't owe Andy anything. My quiz is nothing like Andy's "guess the movie" posts. In the first place, my quiz will give you a sporting chance. And there won't be any of those red herrings he loves so much. Those things stink. A lot.

So, without further adoobeedoo, here's the quiz.

1. I'm starting with an easy one. Guess the car and the movie. It's easy because you've got a picture of the main stud actor right there lookin' at you. Hint the car is from '57. I know it's kinda bashed up but what make and model is it? 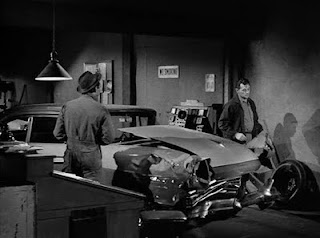 After letting you see the star and one of his cars, if you don't get this one, you need to go out and get yourself some hard corn liquor. Knowhattimean?

2. Again, name the car and the movie. This movie (also from the late '50s) is something of a "cult" movie. The star of the movie was in the news recently. I'm sorry to say she died and there were some unusual circumstances about the body. But you don't have to name her, just the movie and the car. As for the car, be sure and look closely at the rear before you make your ID. The lady in the car (all women in the '50s were ladies) is apparently looking up at something that has startled her. The guy hasn't seen it yet or he'd be bug eyed for sure. If I showed you what the lady was looking at this question would be too easy. A reminder, don't let my word choice here in the last two sentences throw you off. 3. Again, name the movie and the car. This one could be easy because I'm showing you the main actor in the movie (there was also a big name actress in the movie but I ain't showing her). The movie was a big star vehicle in the '50s for both the actor and actress and was based on a famous play. The car should be easy too. If I was the quizzee instead of the quizzer, I'd get this car right away. I used to own one exactly like this, only mine was yellow/gold and cream instead of that crappy blue. 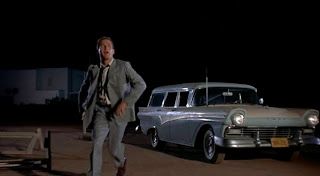 I could give you the name of the playwright but I ain't. There were two really well known playwrights in the '50s. One was basically a commie "intellectual" although he did get lucky with the ladies at least one time in his marital history. But this commie guy is not the playwright who wrote the play that this movie is based on. It's the other guy, who lived in NYC, New Orleans, and Key West during his life.

4.Now we move forward a decade. Once again, the car and the movie. And this time also name the "other" car in the movie. This is so easy you'll probably get this as fast as superman runs.

In case you missed it, the last sentence before the car picture was a hint.

5. Enough of that '60s stuff; we're back in the '50s in spades. Once again, the car and the movie. And if you name the star you get some bonus points. I'm embarrassed that this is so easy.

If you asked what caused me to put such an easy question on this quiz, I'd have to say I was without such a cause. I just did it because I'm a nice guy and I don't want you to bust a brain vein trying to remember it.
6. Again with the '50s. This one is different. But easy. What does the pretty young entertainer have in common with the car. To get full credit, you have to be precise. Hint: Study the autograph. I said the autograph silly. Get your eyes on the autograph. 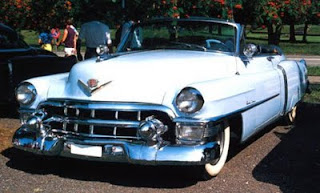