NOTE: We're preparing for a trip to visit Joyce's sister and her husband in Delaware tomorrow. We won't return for about a week so I won't be posting much, if any at all, during that time since our laptop is not the fastest thing going.

1959 Fiat Bianchina Transformabile: My Third Car
Joyce and I were married in August of 1960 soon after we graduated from Martin Jr. College. During that summer, I worked at two jobs in order to save enough money to buy the essentials to start our marriage. I worked 8 hours on a construction crew at Nashville Electric  Service and about 5 more hours at a local grocery (that one only paid 50 cents and hour). Joyce was working as a receptionist as well and contributing to the nest egg. High on our list of necessities was a dependable, fuel efficient car.
Let me say first, that I could have bought a new Volkswagen for $1600. I wasn't making enough to buy it outright but for about $200 down and a reasonable monthly payment, I could have had a dependable Volkswagen. But I didn't buy a VW. I thought they were ugly. I think I've mentioned before that I have a tendency to prefer style over substance. It was a tendency that served me well in voting for liberal politicians over the years, but I learned that tendency should be avoided when selecting an automobile.
What I bought with our hard earned money, was an almost new 1959 Fiat Bianchina Transformabile. It cost as much as the VW, $200 down and a small monthly payment. I've got some pictures of the car but they are hidden away somewhere with some other embarrassing photos of things and events that Joyce and I don't especially like to be reminded of. As a matter of fact, if you look up embarrassing purchases on the Net, you'll probably find a picture of this car. I didn't take that approach to my search, but I did find several photos the Net. Here's the "car" we purchased in 1960. 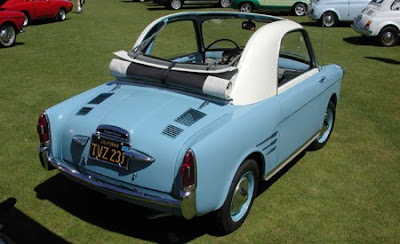 Cool huh? Stylish. Even a little sexy looking in that Italian way, don't your think? If raindrops fell, you could just reach back from the driver's seat and pull that nifty little top up on its tracks and lock it in place at the top of the windshield. Our Bitchin Binanchina wasn't blue though. It was an attractive light green with the cream trim color. 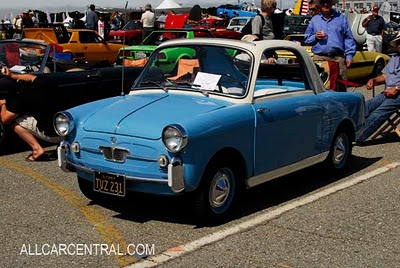 The little Fiat had an air cooled two cylinder engine rated at 17.5 horsepower. It averaged over 50 miles per gallon and could cruise at around 65 miles per hour. At least that's what the salesman said. Ours probably got closer to 100 miles per gallon. What's that you say? Impossible? Not if you're pushing or towing the car most everywhere it goes.
Our Fiat ran sporadically. If it ran at all. We kept it about 6 months. By then I was in the second semester of my junior year at Middle Tennessee State and Joyce was putting the bread on the table. She drove the car to work and was constantly running into trouble with the little demon. It just wouldn't start. You could crank it till the cows came home and it just wouldn't start. We took it back for service several times. The Fiat "mechanics" scratched their heads and didn't seem to know what the problem was. Since it was obviously terminally ill, we thought about assisting it with suicide to collect the insurance. Finally, considering our cash strapped condition (we had used the rest of the nest egg for tuition, books, etc.), my Dad stepped in and paid the salesman $150 to take it back.
In 1996 we got another two cylinder, 17 hp vehicle, this one a V Twin with water cooling. Yeah, that's a John Deere K series, LX188 in the pic below. The Deere is smaller than the Fiat and it's 14 years old now but it has a sturdy Kawasaki engine. It may not look all that great because it's a work tractor, but I keep it well maintained and it starts every time. 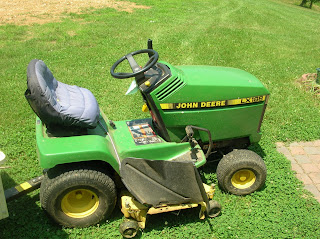 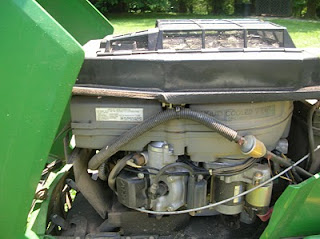 We're using the Avalon for our 860 mile trip to Delaware, but I would have begun the journey in the John Deere before I would have started out in that Bianchina. Mainly because I think the Deere would have (A) cranked up on the first turn of the key and (B) actually got us there.
Posted by Dapper Dan at Tuesday, June 01, 2010