When I was in my adolescence I developed a little skill at drawing things (things not people). I understood perspective and loved to draw automobiles and airplanes of the time.

One plane I must have drawn a thousand times was the Curtis Wright P-40 Warhawk. Except for the problems my hand tremor presents nowdays, I think I could easily draw it today from memory.

I don't have to rely on my memory however. The internet is full of wonderful pix and videos of this great WWII airplane. 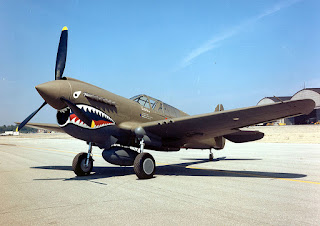 From its shark mouth nose logo (at least on Commander Chennault's squadrons), to its turtledeck, to its neatly curved tail, the P-40 was an eminently sketchable plane.

What about that shark mouth? Where did it come from? Comments on a web forum (The Wings of the Web) indicate that it originated on P-40s being used by the RAF in North Africa who copied if from German flyers who used something similar on their Messerschmitt Bf 110 twin engined fighter bombers.

The shark mouth has been used on more modern aircraft as well, including the F-105Ds and F Thunderchiefs, and the A7D Corsair, and the A 10. One guy on the forum even said he saw a  C130 with the shark mouth. No matter where it came from or what it's been used on since, the sharkmouthed P-40 has become an icon for WWII aircraft.

The P-40 was the 3rd most produced fighter in WWII and served in most of the Allied Powers' air forces. Wiki says,


Although it gained a postwar reputation as a mediocre design, suitable only for close air support, recent research including scrutiny of the records of individual Allied squadrons indicates that this was not the case: the P-40 performed surprisingly well as an air superiority fighter, at times suffering severe losses but also taking a very heavy toll of enemy aircraft.[9] The P-40 offered the additional advantage of low cost, which kept it in production as a ground-attack aircraft long after it was obsolete as a fighter. In 2008, 29 P-40s were airworthy.

The P-40 gained some of its fame because of a popular John Wayne movie made in 1942, Flying Tigers. From Wiki:

Flying Tigers (aka Yank Over Singapore and Yanks Over the Burma Road) is a 1942 black-and-white Republic Pictures war film, starring John Wayne, John Carroll, and Anna Lee. Flying Tigers dramatizes the exploits of the American Volunteer Group (AVG),Americans already fighting the enemy in China prior to the U. S. entry into World War II....Jim Gordon (John Wayne in his first war film) leads the Flying Tigers, a squadron of freelance American pilots who fly Curtiss P-40 fighters against Japanese aircraft in the skies over China. The pilots are a mixed bunch, motivated by money (they receive a bounty for each aircraft shot down), or just the thrill of aerial combat.

Here's the fuzzy old trailer from the movie which gives you some idea about the importance of the P-40 to the movie.


When the Japanese launched their surprise attack on Pearl Harbor, December 7, 1941, there were sixty-two P-40s lined up wing tip to wing tip on Wheeler Field, and most of them were destroyed in the attack. But two American pilots, George Welch, and his friend Kenneth M. Taylor, got two P-40s on Haleiwa Field in the air and shot down some of the Japanese attackers' aircraft. They were credited with two kills apiece (4 Japanese Aichi D3As, Val dive bombers).

Here's a short, contemporary video of a beautifully restored P-40 starting up, taking off and flying. 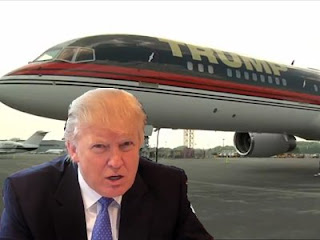