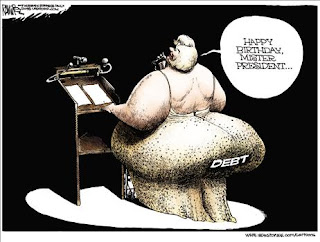 Speaking of hefty females in politics...

Liberals are beginning to pine for Hillary. Follow this Breitbart link and listen to Bill Maher and his guests as they discuss Obama's current status after the debt ceiling deal. It's just a little more than 2 minutes long.

In poker, players try to look for other players' tells.

In the big political poker game of one card draw between the Repubs and Dems, would Maher saying he has buyer's remorse and then posing the question "would Hillary be better?" and the astrophysicist guy's answer (he says "yes") be a kind of tell that they (the Dems) finally know they have a weak hand?

The card they've got in their hand is Obama, who's like the 6 of clubs (not spades, ain't going there) and they're wishing they had a Queen like Hillary.

UPDATE: Regarding the United States' current debt, Bob Bell sent me a little note from Dave Ramsey this morning...

From Dave Ramsey, radio talk show host, Nashville, TN:
If the US Government was a family, they would be making $58,000 a year, they spend $75,000 a year, & are $327,000 in credit card debt. They are currently proposing BIG spending cuts to reduce their spending to $72,000 a year. These are the actual proportions of the federal budget & debt, reduced to a level that we can understand." - Dave Ramsey
Posted by Dapper Dan at Monday, August 08, 2011

Dilly Renfro, daughter of country music legend Doyle Renfro, is a psychic dreamer. When Pearl Emery, the recently acknowledged African-American love child of Dilly's father, is murdered, Dilly vows to follow her dreams to find the killer. ***** Click on the cover image to purchase through Smashwords.

To purchase a Kindle copy of Dream Country for $0.99, click here.

"It is always in season for old men to learn." Aeschylus