My younger brother Dave volunteered for military service in the mid '60s, not exactly a popular action among people his age at that time. He did a year in Vietnam and then re-upped for another year. He was in the U. S. Army corps of engineers, and spent most of his time operating a big Caterpillar D9 clearing jungle. It was very dangerous duty. 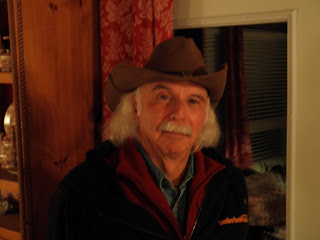 Like many vets, he doesn't talk about that time very much at all. And, like a lot of the returning vets from that war, he had some trouble adjusting to life back home and to some people who did not value his service. He straightened out after a year, but still has dreams and calls out in his sleep. I've heard him call out like that. The desperate urgency in his voice sends chills down your spine.

He's "retired" now from the USPS--I put that in quotation marks because he went right back to work and developed a successful landscape business. He's the hardest working person I know. He will give you the shirt off his back. If you're his friend (or his brother) and you need help, you can count on him.

When Katrina hit the Gulf coast, lots of people sent money and others did a lot of talking about what needed to be done. Dave took off work, loaded his tractor, chain saw, and other tools in his trailer and went right down there. He spent a over week in a little town in Southern Mississippi, sawing trees, moving brush, etc., doing what had to be done.

Dave's the only person I know who's come close to living up to all the tenets of the Cowboy Ethic. (That could be because I spent my career in academics, a profession not known for its high moral values, but the truth is, Dave's value system is pretty rare in any kind of work environment.) If you're not familiar with what the Cowboy Ethic entails, here's Jim Owen's "distillation of the timeless, universal cowboy values that are still relevant to our lives today." They're taken from his book Cowboy Ethics, What Wall Street Can Learn from the Code of the West.

I love my brother. I'm proud of his military service and all his other accomplishments. And I'm glad he made it back from the war. I'm glad his name isn't on that famous Wall. It's a beautiful wall, and a fitting tribute to those who lost their lives in that conflict. But I'd rather have Dave's name etched right where it is--in the hearts of his family and friends.