In 1952, when I was about twelve, I began drawing things. I say "things" because that's what I soon discovered I could do best. People, animals, vegetation, etc. gave me problems and since there were no art teachers in my school (or in most others at that time I suppose) to help me overcome these difficulties, I stayed with what I could do pretty well. Things like buildings, houses, cars, and airplanes.

The drawing process was fun to me and I spent countless hours drawing at home and sometimes during class with my work hidden by an upright book. I especially enjoyed drawing the aircraft of WWII and the Korean War. One plane I drew many times was the Lockheed P or F-80 Shooting Star, the first operational jet fighter of the USAF. I liked the way the plane looked and I loved that name...Shooting Star. 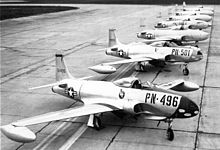 Unfortunately, none of my drawings from that time, survive.

Although initial issues kept it out of WWII, the plane was designed, developed, and built by Lockheed in 1943 in just 143 days. The plane, though slower and less maneuverable than the Russian MIGs, did see lots of action in Korea.

I'm sure I saw pictures of the F-80 in magazines and newspapers at the time and those served as my inspiration.

The aircraft had a beautiful curving kind of fuselage with scoops on both sides for the Allison J33-A-35 engines. I always drew the plane with those wing tip fuel tanks which to my adolescent imagination gave it a more menacing look. 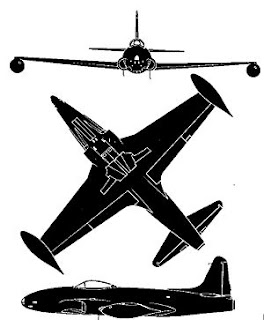 In the Korean conflict, the slower Shooting Star was eventually replaced by the faster swept wing F-86 Sabre. The website flugzeuginfo.net (a great source of aircraft data) says that a little over 1700 of the F-80s were produced. In the late '50s and all through the '60s the F-80 continued to serve in the air forces of several South American countries.

The plane was also modified as the T33 trainer aircraft and was used extensively to train American fighter pilots from the late '40s on through the '60s but other countries used it as late as the '80s. Wiki says the T33 was even employed by the Cuban Air Force in combat during the Bay of Pigs and scored several kills.

The Shooting Star is out of production today but it still lives on in my memory and imagination.