I've already written about my first car as a teenager, that 1948 Chevy as well as the Fiat Bianchina Joyce and I bought when we were first married and still in undergraduate school.

When I finished the course work for my M. A. in English at Peabody in Nashville in early January of 1963, I accepted a position to fill a mid academic year teaching vacancy at Southeastern Louisiana College in Hammond, Louisiana. I was due to report for work at the beginning of the spring semester, about the second week of January.

Using what were called federal "defense" loans in those days (paid back in full in the '70s) and some part time work by Joyce and myself, I had made it through college and the first year of graduate school by the skin of my financial teeth. Our funds were depleted and we were in debt. But we didn't care. Before I only had prospects, but now I had a real job in my chosen profession. The salary I would receive at Southeastern for one semester of full time teaching ($2400) sounds paltry by today's terms but to us it was a fortune.

Joyce and I knew we had to have a newer car to even get to the job. As a student, the bank wouldn't talk to me about a car loan, but as a graduate with a job they were more than happy to help me.

There were three of us by then--Barry was 1 year and five months old. We didn't have much in the way of material possessions but we had accumulated some "stuff" over our 2 1/2 years of marriage.

We were driving (sometimes pushing) a nine year old '54 Dodge Royal (formerly my parents') that by that time was smoking heavily and looked pretty beatup as a result of a rear end side swipe my Mom had experienced several years earlier. It frequently wouldn't start or would fail to complete the three mile trip from our apartment to Peabody; setting out to Louisiana in it was out of the question.

We needed a car that was big enough to load up our meager belongings and dependable enough to make the trip to Louisiana without difficulty. We found the perfect vehicle at Hippodrome Ford on Broad Street one gray, cold day in January. It was a yellow and cream four door, 1957 Ford Country Sedan. The picture below is not the actual car; I have pictures of it somewhere in our attic storage space which I've been promising to dig out for a couple of years now. but this one looked just like it. 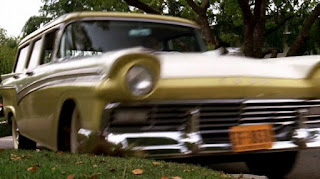 The big wagon was already six years old but in really good shape. As for the engine, it was an OHV Ford V8. Wiki says, 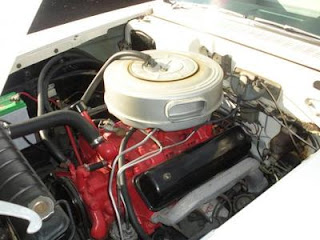 I'm not sure now after all these years, but I'm pretty sure ours was the base 6 passenger  model which had the 190 hp, two barrel carb version of the engine. Whatever it was, it would go pretty good for such a docile and practical looking vehicle.

We laid down the back seat and filled up all that storage space with pots, pans, Barry's baby bed, clothes, our small 17 inch white Motorola TV, more clothes, and linen; in short, everything we owned we carried in the back of that Ford wagon. The picture below shows a green interior, ours was brown. The picture shows the rear seat up, while we had it down flat to provide more space for our "stuff" when we made the trip. The picture also shows the space empty; when we made the trip to Louisiana, our wagon's space was completely full from top to bottom. I could only see the rear through my side mirrors. 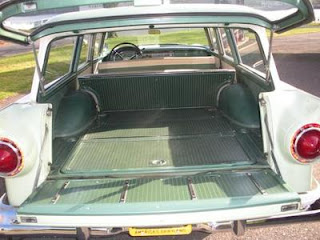 Barry rode up front with us on the front seat. He had a little flimsy traveling bed that would change into a sitting position which he slept or sat in some, but most of the time he sat in Joyce's lap or stood (horrors) on the big bench seat between us.

The Ford did great on the trip which was pretty uneventful. About the only thing I remember is that we had our first Po Boy barbeque beef sandwich at some drive in restaurant in McComb, Mississippi. It was pretty danged good.

Our time in Louisiana was short and for awhile we had a rough time. It was my first teaching assignment and I was trying to learn the ropes. But much worse than that, Joyce had a miscarriage. She became anemic and took several weeks to recover. But we nade some good memories too. We learned the real meaning of Southern Hospitality. Colleagues, friends, even our landlord, went out of their way to help us during our troubles.

I was offered a full time job at Southeastern for the coming academic year at an annual salary of $4800, but I had been looking around for other possibilities. Eastern Kentucky offered me $5600 (an $800 raise) and after our difficulties, Kentucky sounded a little bit better to us than Louisiana.

During this time, the Ford served us well. It started every time and required nothing other than normal maintenance. It continued to serve us for another year in Kentucky until we traded it in on our first new car, a 1964 Dodge Coronet. But that's another story.

Here's one last look at that great old Country Sedan. Ford's slogan used to be, "There's a Ford in your future." There may be. But there is definitely one in our past. No wait. There are two in our past. This one and that 1971 Pinto. But that's another story too. 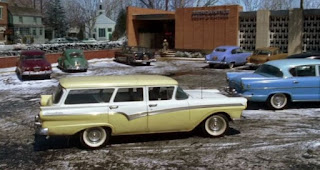 UPDATE: With his comment about a trip he remembers from his childhood, reader Buck reminded me of another part of our journey to Louisiana. Here's my response to his comment, complete with a Wiki link if you want to read a little more about the Natchez Trace Parkway (a most interesting roadway):

Buck, Thanks for helping fill out my memory of that trip a bit. As you point out, the roads 50 years ago were different, very different. I remember we drove to Columbia, TN and then made it over to the Natchez Trace Parkway. This is a two lane limited access road first begun under FDR that follows and commemorates the original trail used by early settlers in the South. The trail itself still remains visible at some points on the parkway; you can see the deep ruts of wagons from long ago. We took the Trace down to Jackson, MS, and then went further south toward Hammond on a blue highway, the number of which I can't remember now. But I do know it passed through McComb.