We've had four days of rain now. The creek in the park is up and the ground is saturated. I'm going out in the drizzle after I write this to buy licenses and pay wheel tax fees on both our vehicles (yeah, that $150 hit comes right at Christmas too). And my old computer is still killing me with blue screens, and I can't make up my mind about which new computer to buy.

I know there are people with a lot worse problems, and I'm not saying this is in any way as bad as that, but, it is my problem right now. I'm at a fork in the road.

One road leads to Mac-ville. It's a very, very expensive road to travel on, but according to reports is a clear, simple journey that can be made without difficulty. If you want to pay the high toll upfront.

Another road leads down Windows lane. I've been on this road all along, so I am familiar with it. It's relatively cheap to travel on (especially in comparison to the Mac-ville road) but sometimes there are breakdowns. It's a soft enough road, micro-soft some say, but the twists and turns and mapping problems can give you headaches.

Right now I can't make up my mind. Undecided, washing this wishy and wishing that washy if you get my drift, and I am drifting. Floundering. I'm on the outskirts, so to speak. Can't seem to make it into town.

Which reminded me of this song I heard last night in a great "little" movie (practically unwatched, according to IMDB) called "Around the Bend," starring Josh Lucas, Michael Caine, and Christopher Walken. It's an emotional drama about fathers and sons. Right now it's on Starz On Demand on our Comcast cable setup; check it out sometime if you get the chance.

Anyway, this song "Carmelita" played in the movie. It's by Warren Zevon and the singer I heard in the movie was male, but I don't think it was Zevon. 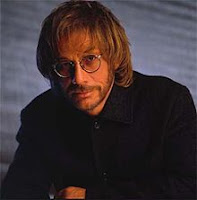 Linda Rondstadt sang it back in the 70s and Dwight Yoakum has a version too. He wasn't singing it in the movie but I'm using his version here.

I'm not on heroin like the speaker and never have been, but I do think I'm hearing Mariachi music on my computer.

(On a side note: I'm not much liking the new youtube format. You can't seem to escape the ads.)