The Buttercups are blooming. Or is it Daffodils? Apparently it's the latter. I've always referred to Daffodils as Buttercups, even after I read Wordsworth's famous poem (printed below the pic) in college. I learned to call these flowers "Buttercups" from hearing my Mom, my Aunts, and others in the family and the neighborhood I grew up in use the word to describe the flowers in the picture below. I can hear Mom saying, "Lookee there. Mrs. Tatum's Buttercups are already blooming."

I now know that Buttercups are single flowers, usually found in the wild. They're yellow but are smaller and their petals are rounded and more open. Daffodils are...well they are what they are. Beautiful. I especially like those I've seen on a country lane near my home which line the no longer visible driveway up to a stone chimney...the only thing remaining of a once grand farmhouse. They've outlasted the structure and the loving hands that planted them and they keep coming back spring after spring.

But...since I don't recall ever seeing an authentic Buttercup in my neck of the woods, I think I'll still keep calling these Daffodil flowers by the name I learned as a child--Buttercups. They look like cups of sweet creamy, freshly churned butter--so they'll always be Buttercups to me. 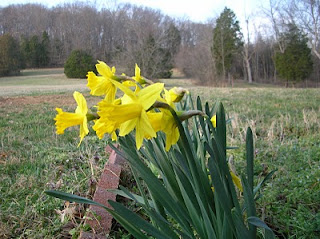 
I WANDER'D lonely as a cloud

That floats on high o'er vales and hills,

When all at once I saw a crowd,

A host, of golden daffodils;


Beside the lake, beneath the trees,

Fluttering and dancing in the breeze.

Continuous as the stars that shine

And twinkle on the Milky Way,


They stretch'd in never-ending line

Along the margin of a bay:

Ten thousand saw I at a glance,

Tossing their heads in sprightly dance.


The waves beside them danced; but they

Out-did the sparkling waves in glee:

A poet could not but be gay,

In such a jocund company:

What wealth the show to me had brought:

For oft, when on my couch I lie

In vacant or in pensive mood,


They flash upon that inward eye

Which is the bliss of solitude;

And then my heart with pleasure fills,

And dances with the daffodils.