A couple of days ago I posted a Youtube song by Lacy J. Dalton called “Black Coffee.” It was, I admit, a depressing ditty and did nothing whatsoever to help the mood I was in. Nor did it exactly light a fire under the readers who stopped by. (Sorry, Buck, Scooney!)


To right the ship, to put the USS Cumberland Post back on an even keel, I’ve got to post another song by Lacy J., her signature, “16th Avenue.” Although tinged with the sadness of those who don’t achieve their dreams, it still communicates the hope of all those aspiring singers, musicians, and songwriters who come to this city following their dreams. As you’re listening, I invite you to scroll down and read the rest of the post (about Nashville's 16th Avenue) since there’s no accompanying video to Lacy J's rendition of this excellent song.

Although it's reached almost mythical status (partly through Lacy J's song), 16th Avenue is a real street in Nashville. It's part of what's called the Music Row area. This is where most of the business of the music business is conducted. The Row includes 16th and 17th Avenues South (called Music Square East and Music Square West) and several other side streets. What kinds of businesses are located there? Record label offices, publishing houses, music licensing firms, recording studios, video production studios, and even a couple of radio stations.


If you're in a car driving through the area and you drive to the place where Demonbreun Street, Division Street, 16th Avenue South, and Music Square East converge, you'll be shocked to find a Roundabout. You read that right. A Roundabout. In Nashville. 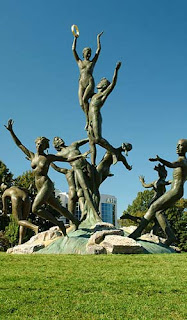 There's a tiny park inside the Roundabout. It features a large statue called "Musica" which depicts nude dancers. The statue Musica was created by the same artist who did the Athena statue in Nashville's Centennial Park replica of the Parthenon (Vanderbilt grad Alan LeQuire). On his website, LeQuire says, "Dance is the physical expression of music....The theme of the sculpture is music, because of the historical and economic significance of the site."


Still, IMHO, those classical looking nudes look a little strange there in that locale. As a matter of fact, there was a bit of a controversty when the statue was unveiled a few years ago. A fundamentalist church group and a parents group raised a little Hell about the naked statues and their exposed genitalia. Now, I don't have an problems with nudity (in bronze or in the flesh), but I do think the statue is incongruous.


It's a public work of art and as the artist says, it's supposed to say something about the Music Row area and it's economic and historical significance to the city. But this statue doesn't do that. Its classical allusion to the Muses of mythology seems, to use musical terms, cacophonous in that location and off pitch in terms of purpose. These classical nude Muses are esthetically jarring and I don't mean that in some sort of avant garde good way. The whole thing just looks bizarre. Le Quire should have taken a look at Thomas Hart Benton's painting "The Sources of Country Music." Benton's painting hangs in the Country Music Hall of Fame; the preceding link will show you the painting and present an analysis of the five sources of the music that are depicted.

And here's one more personal take on Le Quire's Musica thing. The elites in this town have always had a chip on their shoulder about country music. Most of them will tell you they despise the twangy stuff, that it makes Nashville sound and look like a hick town. At the same time, they like the fame and publicity and the tourist dollars the music brings in. So, the fact that they came up with a statue like that doesn't surprise me at all. They wanted to get in on the action and stick it to the yokel fans of the music at the same time.

Just to the West of the Roundabout is Owen Bradley Park, another very small park dedicated to notable songwriter, performer, and publisher Owen Bradley.


Within the park is a life-size statue of Bradley behind a piano. This statue actually does what the other statue was probably supposed to do.

I didn't intend to get into a long discussion of pubic public art here, but you sometimes have to go where the BlogMuse leads you! Getting back to the real 16th Avenue. I think I've mentioned that I've been working on a mystery novel called Blood Country. There's a passage in the novel that was inspired by a couple of songwriters I've known and by Dalton's song.

The narrator is Joe Rose, a Nashville sideman guitarist whose day job is as a private investigator (what else!). He's come to Great Axe studio on 16th Avenue to meet with his client, superstar guitarist/producer Vern Hamlin.

When I pushed through the glass doors, I saw five or six would-be songwriters and           performers seated in the lobby clutching demo tapes and guitar cases, waiting for a chance to pitch a song to Vern Hamlin. They were also waiting for their big break. Most of them   would probably be waiting forever. I knew about that agony first hand since I'd waited too long on that dream myself. The hope in the air was palpable; you could feel it, smell it.       Too much hope like that, confined in so small a space, cloys my spirit.