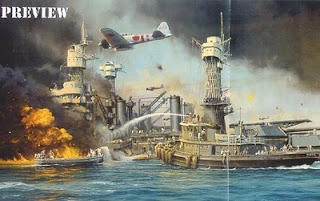 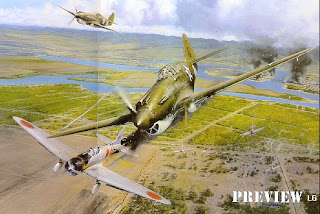 I'm posting this tonight because I'll be busy most of the day tomorrow.

Things look pretty bleak right now. Because of the current administration's policies, North Korea is making threats, Iran will apparently have the upper hand in the coming "negotiations," and the economy is still in the tank.

Things looked a lot bleaker late in the day on December 7, 1941. But we pulled together, we created a vast army through conscription and volunteers, we built an enormous number of weapons, and we found the right military leadership. Within the short span of three and a half years, we subdued our enemies.

I hope we can do the same today.

From the website of artist Robert Taylor who painted the two works of art above:


There are few truly defining moments in the history of a State - single episodes that touch every citizen, and cast a nation's future. Epoch-making events that influence the entire world are even more uncommon. The events that took place in the space of less than two hours on the morning of December 7, 1941 were of such defining importance, their memory is now deeply embedded into the history of the Twentieth Century. At ten minutes to eight, as the US Pacific fleet lazily came awake suddenly, and without warning, the world around them exploded with all the mighty force of thunder: Within seconds Pearl Harbor became cloaked with attacking Japanese aircraft. Before sailors could comprehend what was happening, bombs and torpedoes had ripped out the heart of the fleet: Four of eight battleships were sunk; a dozen more naval vessels lay stricken in the water; 2400 souls perished.

Here are his comments on the second painting depicting the two USAAF P-40's that managed to get airborne on that fateful day:


The very first air combat fought by American pilots following the surprise attack upon Pearl Harbor. In less than one hour America struck back in a war that was to end in total victory. As the assault mounted on the Pacific Fleet in Pearl Harbor, simultaneously the air base at Wheeler Field came under heavy attack. Two young USAAF pilots, Kenneth Taylor and George Walsh, quickly got their P-40 Tomahawks airborne. Winging southwards towards Ewa Field they ripped into a dozen or more enemy planes attacking the marine field. Diving into the formation they each downed 'Val' fighter-bombers. Robert Taylor's painting shows Ken Taylor in his P-40 tomahawk, with George Walsh in close company, bringing down his second enemy aircraft on December 7, 1941, an Aichi D-3Al ' Val' dive-bomber. In the background palls of smoke rise from Hangar 6 housing the naval float planes, and the up-turned battleship Oaklahoma.

Note: The United States Army Air Corps used the name Warhawk for this fighter; the Brits and the Russkies called it the Tomahawk.

If you have time, visit his website via the link above and see more of his excellent air art. If you have the money, buy some prints or originals.
Posted by Dapper Dan at Monday, December 06, 2010