Weather update: So far the snow hasn't made an appearance here in the Hollow, but the wind is howling and the temperature has dropped to 25. The weather guys are still calling for 2 inches today and tonight and bitter cold over the next three to four days.

That kind of weather makes Nashville feel a bit more like a hockey town. And who knows, the colder weather may be impacting the players favorably. Our rookie goalie, 6' 6," 205 pound Anders "The Beast" Lindback is from that giant socialist icebox known as Sweden, so this weather must seem just like home to him. 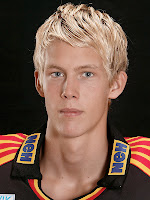 To illustrate my point, The Beast "made 22 saves in his first NHL shutout, and Ryan Suter had a goal and an assist as the Nashville Predators beat the Florida Panthers 3-0 Saturday night. Nashville has won five of six and has earned at least one point in seven straight games. Florida's three-game winning streak was snapped."


Note to Buck: Thanks for pointing out to me the Preds recent successes. Especially the 3-2 victory on the road against your Western Conference leading Detroit Red Wings!