I've been working on a new blog to promote Blood Country. It's called Country Dirt and it's going to be my main site for the book. I'll leave a book link in the left column here on the Post, but I won't be writing anymore stuff here about it, sullying up this place with all that crass materialistic, commercial stuff.

Not that this place is all that pure or anything, I'm just speaking figuratively. Mainly, I don't want to estrange the few bloggers friends who stop by here regularly by boring them with constant "buy this book" posts.

I'm working on a promotional video (if I succeed, I might have to violate my anti-sullying rule and use that here on the Post as well, just to see what ya'll think about my first cinematic attempt), and I'm also eventually going to set up a Facebook page. Now, that Facebook thing could be a real adventure for me.

Anyhoo, here's the first post from over at the other site, and a link in case you want to check it out. This post might be of interest here because of the video of an old friend I found on youtube. He's a songwriter/singer and...well, I explain more below in the first Dirt post:

Country Dirt? What's up with that title?
The "country" part refers to country music. I love country music. I live outside Nashville, but be advised, that fact doesn't guarantee my affection for the music. I know lots of people here who don't like it, some who hate it, even some who are embarrassed by it.
I just like it, it's simplicity, it's general reliance on lyrics over volume, and it's themes that connect to real people's lives. Before my parents got a TV, I listened to the Opry on Saturday nights on the radio. After we got a TV, I watched Flatt and Scruggs, Porter Wagoner, the Wilburn Brothers, etc. on TV. Right now, the first preset radio station on my truck radio is WSM, 650 AM.
I like Rock and Roll and other kinds of music too. But my heart has always been in country.
I've always been fascinated with the people who make this music, not only the stars, but the sidemen as well. Over the years, I've had connections with several people who are involved with music in Nashville, at least on the edges of that scene. An old friend of mine, Charlie Barnes, was a sideman for Jeannie Seeley and Jack Green for awhile. He cut a single or two back in the day and still can play guitar with the best of them and has a great voice. Another good friend and former work colleague is the son of a famous Nashville sideman, Howdy Forrester; Bob's a super fiddle player himself.
In the '70s I met songwriter/singer Guy Golemon. We became friends for awhile and our kids played together. We had quite a few beers over the years and I even helped him move into a new apartment one time. When they grew up, his sons John and Will became a major part of the group, The Cactus Brothers. I lost track of Guy but recently saw this great video from 1988 posted on youtube last year by his son Will.
Nashville can sometimes be a dirty, mean spirited place for an artist struggling to get noticed. Guy's song nails the frustration that a lot of artists who come here eventually feel. And that leads me to the second word in this blog's title.
"Dirt."
Even as a boy I liked to play in the dirt, making roads and racetracks and battlefields. My grandma used to say, "Let that boy alone, a little dirt never hurt anyone." When I got through playing, I could always take a bath.
My Encarta Dictionary has several meanings for "dirt." 1. unclean substance. 2. earth. 3. hard packed earth. 4. scandalous facts. 5. corrupting influences.
I think all of these meanings are in play here. I will sometimes deal with "unclean" things in country music, scandalous facts, corrupting influences, etc. 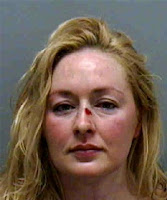 I figure there's plenty of material in this area for lots of posts; I could do a whole month on George Jones' shenanigans, for example. And, in this same context, the travails of Mindy McReady come to mind. That's poor Mindy to the right.
I've got my first post in the hopper now about a drunken Ernest Tubb's attempt to shoot (with a .357) a well known Nashville producer.
But, I'll always be on the lookout for stories readers might have; if you've got dirt, share it here. (I'll be glad to research your stories/rumors and post them.)

But I'll also pay attention to meaning number 2, earth, as in the good earth, our home, the source of our sustenance. Country music is often said to be "down to earth," or "earthy." Nothing dirty about that. I'm thinking in this context about stories of how struggling artists got discovered, what obstacles they had to overcome, etc. Also, Again, any stories or anecdotes along these lines that you want to share on this site will be welcomed.
In the interest of full disclosure, there's one other thing I need to tell you. I'm using this blog to promote (sell!) my book, Blood Country. It's a mystery novel set in Nashville and the private detective is also a guitar sideman. The case he's digging into involves him with one of Nashville's most prestigious music families and some scandalous secrets that they've hidden for twenty years. I'll be doing regular posts about the novel and sharing some excerpts from the book here. Right now, you can read more about the book (and buy it) by clicking on the links to the left.
That's all for today, partners.

It's fun to play in the dirt, but always take a bath when you're done. Until we meet again, stay true to yourself, and when you do anything, give it your best shot.
Posted by Dapper Dan at Friday, February 18, 2011