I watch mostly movies on TV, but sometimes a show comes along that demands my attention. I first took notice of FX's "Justified" last year when I read it would be based on a story by Elmore Leonard.

Elmore Leonard, is, IMHO, in the top ten writers in English in the 20th Century. I know that's a brash statement, especially since Leonard is a "popular" writer, whose works have sold in the millions and have been used for movies and TV shows. 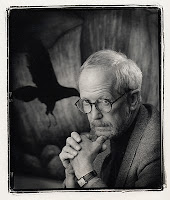 What movies and TV shows? Let me give a few examples. I'll start with a western, since that what he started writing first. You've heard of "3:10 to Yuma?" Perhaps "Valdez Is Coming?" "Hombre?" "Last Stand at Saber River?"

His Wikipedia entry notes that he's sometimes called the "Dickens of Detroit" because many of his earlier novels were set there and they present accurate portraits of the city's people. Many other writers have praised Leonard

My quick count on his Wikipedia page gave 48 novels. Here's a couple (from many) that I've read over the years that I really enjoyed: Stick, and Cat Chaser.

Back to Leonard's "Justified," which is based on his story "Fire in the Hole." The show's Eastern Kentucky, mountainous setting is one thing I enjoy.

This unusual (for Hollywood) setting immediately sets the show off from the NYC, LA, Chicago, crowd. The setting also influences the kinds of stories that are told and how they're resolved.

And, it allows for all sorts of interesting and different characters. I lived in Richmond, KY, for a few years in the early '60s, and from my experience there and in Campton where I taught an extension class, the characters Leonard and the show's writers have created are drawn accurately. It's TV, so there's some stereotyping, but overall, the characters seem real.

As Givens, a Kentucky native sent back (as punishment) from the Miami office to Lexington after he shoots a cartel member at a restaurant (it was, as Givens is wont to say, "justified"), Olyphant is the poster boy of the series. But his intensity is matched by Walton Goggins, who plays Boyd Crowder, Givens' boyhood friend-turned-criminal. It's possible that Season 1 would have been riveting without Goggins, the former "Shield" star who was supposed to die in the pilot. But the writers saw the chemistry the actors had and the magnetic and crazed gravitas Goggins brought to the part and couldn't turn their backs on what is likely to become a long-running friendship/feud between Raylan and Boyd.

Leonard likes the show as well.


Elmore Leonard has never been shy about letting people know what Hollywood has done to his books. But in the case of "Justified," the FX series based on his work, he has said writer/executive producer Graham Yost and his staff have not only nailed the characters, tone and nuances but also gone beyond his wildest hopes.

It's usually a good sign when an author praises a TV or film adaptation of his work. Take a look at "Justified," on FX on Wednesday nights at 9 Central. If you like what you see, check out the whole first season and then start blocking out your Wednesday nights for the next 13 weeks.