Joyce had her first chemotherapy session today. It lasted about 3 hours and involved a cocktail of anti-nausea meds, pain meds, and some really nasty stuff that would pretty much kill everything in her body for awhile.The nurse first gave a very clear explanation about what was going to happen, then she started the drip. When the nasty stuff went in, she stayed right there watching carefully to make sure none of the devilish looking stuff (it's red) didn't leak out. She explained that just a drop or two on the skin could do some serious damage. Thank goodness, Joyce's IV port worked well and there were no problems. She's been sleeping pretty much all the time since we got home. We return to the hospital tomorrow to get a special shot designed to counter some of the destruction the nasty stuff is causing (especially reducing her white blood cell count). If the white cell count gets too low, it could be very dangerous to her. This shot costs something like $3500.

Politics intrudes. As we were leaving the waiting room, I saw a new issue of Time had just been placed on the magazine stand. I looked at the cover and almost gagged. 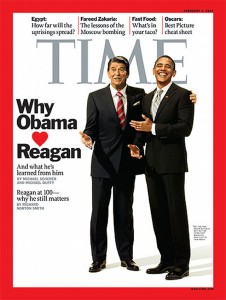 Time magazine used to be the most respected weekly news magazine. Now it's so partisan, the editors are willing to show us on the front cover that they are simply shills for the Democratic Party. I was already feeling bad and Joyce was feeling a lot worse and then we saw this sickening cover picture.

Ron Futrell over at Breitbart's Big Journalism site, takes us behind the scene and gives us what he calls the view from behind the photo. Check it out. I know you need a laugh after seeing that photo. Futrell doesn't disappoint.
Posted by Dapper Dan at Wednesday, February 02, 2011