What Super Bowl? We Got a Hockey Team! Preds 3, Red Wings 0

I know all over the U. S. it's Super Sunday. I know most people are into preparations for a big Super Bowl Party. The beer is iced down and in a few hours they'll have their pulled pork smokin', their hot dogs and burgers grilling', their pizzas bakin', and their hot wings sizzilin'. They've got their green and gold mackinaws on, or their black and gold jerseys all ready. Quite a few are probably spiffin' up their cheese wedge hats or getting their special Steelers face makeup ready for the Big Time.

Here in Nashtown, however, things are a little different. Yeah, plenty here are doing what I said, but we got other things on our minds. I'm talking about hockey. 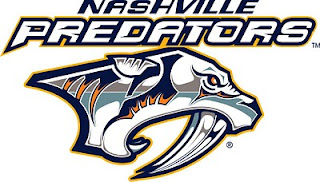 That's right. Hockey. We got a hockey team. The Preds. Recently, they've been on a 4 game losing slide, but last night, oh, last night, they broke through big time.

If you read this blog, you know I've never been much of a hockey fan. (Gimme a break. I'm from the South, it just isn't in my genes.) But I'm ready to admit, one can learn. After all, that's what the internet is all about. Right?

NM blogger Buck is a true hockey fan. He's been ranting on about the beauty and glory of hockey and the absolute fabulousness of his team since I started reading a few blogs about a year ago. Buck's passion  about the game and his devotion to the Detroit Red Wings is frequently on display, but not to excess. Some of his readers razz him a little about it when he goes on a hockey tear; he's sensitive about that, which earns my respect.

Guess what I found this Super morning?

Seems the Preds finally got it together after losing 4 straight. Their goalie, Pekka Rinne, came through with a shut out as the Preds defeated the wondiferous Wings 3-0. The paper's Josh Cooper says,


Rinne's fourth shutout of the season propelled thePredators to a 3-0 victory over the rival Detroit Red Wings on Saturday in front of an announced crowd of 17,113 at Bridgestone Arena.

According to Cooper, Coach Barry Trotz calls Rinne " the eraser."

Like I said, I'm not quite there yet as a hockey fan. But I know enough to understand that having that puck slammed at you 35 times and stopping it every time ain't no small feat.

In the interest of accurate reporting, I need to note that the Red Wings do have a better over all record. The Preds are 28-18-7 while the Wings are 31-15-6 for the season. Still, we're 2-1-0 against them this year so far.

But now that I've done my duty and brought up the record, here's the thing I still haven't got into, haven't grasped yet about hockey. It's like one of those mysteries of the ancient catholic church that only the ordained priesthood could understand. The laity (that would be me) were doomed to writhe in their ignorance forever because they just couldn't muster the necessary levels of faith and learning to fathom those mysteries.

Ooops. Got a little off track there. What I really wanted to say, is what's up with this tie thing? And the points that go into the rankings?

Oh well. I'll save that for another day. We won. That's what matters most. Right?

Finally, you'll notice that I don't have any pics here of the game. The Tennesseean has a note under each picture connected to the story indicating that you can purchase said pic. Guess they gotta make a buck anyway they can these days.

So, speaking of bucks, and getting back to a specific New Mexico Buck, he's just finished off a week of bad (and I do mean bad weather) in which his cache of cigars froze, and now he hears his beloved Wings have fallen. He must be in a real funk, so I'll just end with this to cheer him up a little: 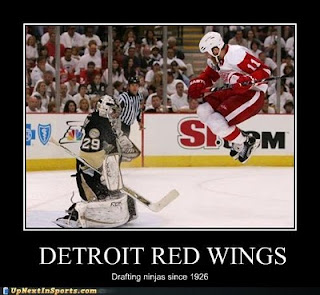