Dang it. I like the internet. And I love youtube. They're the new university. They're a veritable fount of information, and best of all, you get direct access without filtering the knowledge through some left wing idiotard pontificating instructor. Even without trying, you can learn something on there. It's a fact.

Heh. No. The Public History Doctorate. Just send me $19.99 and a boxtop from a carton of reduced fat Cheezits. Nah. I'ze jus pullin' your leg. You don't have to send me nothing. (But do try those reduced fat Cheezits, they're pretty good.) The best thing about my P. H. D. is you can give this degree to yourself.

That's right. Just work hard on the innernets, then, go to this site and make yourself a doctorate degree. You can make your diploma certificate as fancy as you like. What kind of program of study must you complete? How many hours must you spend learning about Patsy Montana and other esoteric subjects? That's all up to you, grasshopper. You'll know when you're ready to award yourself a diploma for all your research on the Innernets and the Tube of You.

I myself know that I'm not quite there yet. I need to dig a little deeper. A lot deeper. There are huge gaps in my database. Like this singer from the 1930s and 1940s. Connee Boswell who apparently was a big influence on Ella Fitzgerald. The onliest important Boswell I ever heard of before was the Boswell who wrote the Life of Samuel Johnson and about whom I learned a little (make that a very little) when I got one of my useless Humanities degrees back in the '60s.

So there you go. This Connee Boswell is important too. I learned about her on the Innernets, but you're probably not going to find a course about her in any college catalog.

Constance Foore "Connee" Boswell (December 3, 1907, Kansas City, Missouri – October 11, 1976, New York) was an American female vocalist born in Kansas City but raised in New Orleans, Louisiana. With her sisters, Marthaand Helvetia "Vet" Boswell, she performed in the 1930s as The Boswell Sisters and became a highly influential singing group during this period via recordings and radio. Connee herself is widely considered one of the greatest jazz female vocalists and was a major influence on Ella Fitzgerald who said, "My mother brought home one of her records, and I fell in love with it....I tried so hard to sound just like her."[1] 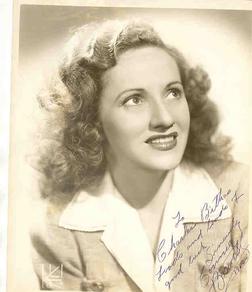 The name of their 1934 song "Rock and Roll" is an early use of the term. It is not one of their hotter numbers; it refers to "the rolling rocking rhythm of the sea".
...
In 1936, Connee's sisters retired and Connee continued on as a solo artist (having also recorded solos during her years with the group).
...
Connee sang from a wheelchair - or seated position - during her entire career, due to either a childhood bout with polio or a childhood accident (sources differ). The general public was not aware of her condition although Boswell herself did not keep this secret. During World War II, she tried to get involved with the U.S.O. tours but was not given permission to travel overseas. The Army thought it might not be a morale-booster to have a singer who used a wheelchair perform for the troops.
Connee Boswell was a favorite duet partner of Bing Crosby and they frequently sang together on radio as well as recording several hit records as a duo in the 1930s and 1940s.
Now this, from youtube.
Posted by Dapper Dan at Sunday, February 20, 2011