Coffee's hot. Smooth 100% Arabica. Toast is just out of the oven, butter melting.

Toasters are fine, but you got to butter after the heat, right? I prefer butter first, then put the bread in the oven (I actually use the broiler). That way, the butter and the bread come together. At the risk of offending a possible reader or two, I'll say it's almost a kind of transubstantiation. At least it seems to have that effect on me. Hot coffee, soft warm toast with oozing butter. A glass of cold milk on the side. I'm a new man.

1. First Slice. Damn snow (we just had another one last evening and the temps are plunging again). What's going on here? This is Tennessee, dammit. Wintertime is usually rain, rain, rain, one little snow, rain, rain, more rain. Geez. 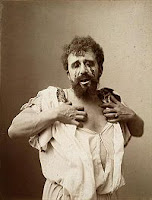 The ancients dealt with weather uncertainty by deifying it. There were gods of the Winds, gods of the rain, gods of the storm, etc. These gods could be appeased through prayer and sacrifices or offerings.

Sometimes, if things got really out of hand, a poor unlucky soul was selected as the representative of the community for such a sacrifice. He/she might be exiled out of the village into the wild, or this person might be killed as a sacrifice, or as some kind of appeasement to the angry gods.

Sometimes the people selected were leaders, kings. Some scholars say the Greek story of Oedipus fits this pattern. Wikipedia info tells us that a seemingly weather related plague grips the city of Thebes.

Many years after the marriage of Oedipus and Jocasta, a plague of infertility strikes the city of Thebes; crops no longer grow to harvest and women do not bear children. Oedipus, in hishubris, asserts that he will end the pestilence.

He finds, of course, that he is the cause of the pestilence, he is the disruption in and offense to the natural order. Before the city exiles him, he gouges out his own eyes so he can't see the children he fathered with his mother Jocasta.

I'm wondering. Did our Global Warming Scare propaganda offend the weather gods? Were they outraged because some of us puny mortals thought (or were taught) that we were so mighty we influenced the weather, that we were more powerful than they? 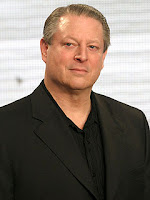 The high Priest of the Global Warming Scare lives right here in Tennessee. Nashville, to be exact. Perhaps, if we rose up and demanded that he sell his house here, and then kicked him out of the state, and permanently exiled him to the vast liberal California wasteland, the balance would be restored, the winter rains would return, and the damn snow would stay where it belongs.

2. Second slice of toast. Speaking of hubris. I boasted about the Preds' prowess in defeating the Wings in an earlier post. These things do come back to bite you. In this morning's Tennesseean sports headlines, I found this one: "Predators pummeled by NHL's worst team."

The facts don't lie. The Preds are going down, down. They've won only 1 of the last 6 (that would be the victory over the Wings). Could this losing streak be related to my first slice of toast? Is it Gore's fault?

3. Third slice. The coffee and toast are kicking in. I'm feeling better. Just need a little music now, and my day is ready to go. Some superb flatpicking oughtta do the trick.

I've liked this Tennessee guy for a long, long time and own two vinyls to prove it (one's called "Whiskey Before Breakfast," the other title I can't remember right now). He once played in Hylo Brown's bluegrass band and in the early '60s was inspired by Doc Watson.

I'm speaking of Norman Blake, whose loose right hand touch is so light, it's almost like that soft butter in the middle of the toast. Okay, I'm pushing it, I know. But just pour a second cup and watch and listen. Especially the way he knocks those bass notes down on the D-18. That Adirondack spruce soundboard just hums in your brain.


This video is from his prime, not that he still isn't top dog in my book. He's got those '70s gold rims working and he's with his cool crew, the Rising Fawn String Ensemble, both superb musicians. This song is called "Randall Collins."

One of my favorite songs of Blake's (he wrote this one) is "Slow Train Through Georgia." Not so much fancy flatpicking here, just a good "escape" song with great lyrics. I've learned the chords and lyrics to this one and sometimes try it on the old Silvertone dreadnought. On a cold snowy day like today, taking that Sunshine Southern Special and rolling down to the sea sounds pretty good.